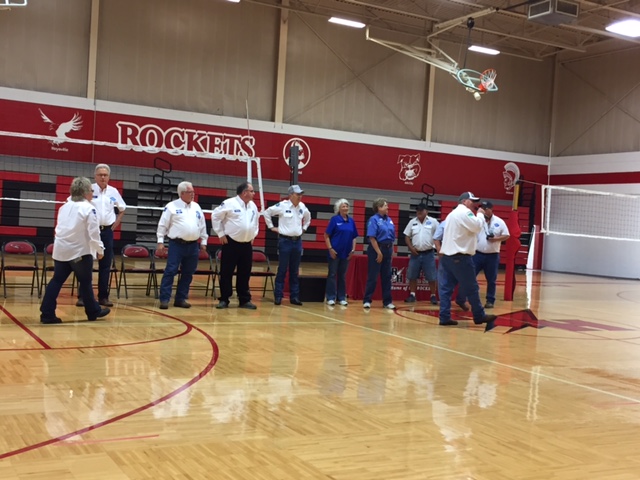 Rose Hill Middle School Students and Staff started their day with a Pep Assembly in the Middle School gym.  Thursday, October 6th, all RHMS Staff and Students were geared up with excitement and enthusiasm for their Pep Assembly and all week Spirit week with today being ‘backwards’ day, but not as much as they were when it was almost over and drivers from the Wal-Mart Trucker Association showed up in 18-wheelers to surprise Charlie Futhey.

They came bearing gifts; they presented Charlie with his very own shirt with his name sewn in cursive, hat and gift cards to spend at none other than Wal-Mart!

To add to the excitement Charlie was presented by the Mayor Beth Pompa a ‘Key to the City’ and proclaimed today ‘Charlie Futhey day’.

As students and staff all pumped and excited for Charlie exited the gym, Charlie was then able to ride in a bright, shinny "red" Mustang. He then was seated in one of the trucker’s truck (blue one) that displayed his picture on the side of the truck for the journey to the Wal-Mart store.

A convoy of truckers led by the Rose Hill Police and Fire Department began their way from the Middle School, north down Butler Rd. to the Wal-Mart on east Kellogg so Charlie could enjoy a shopping spree all paid for by the Wal-Mart Trucker Association.