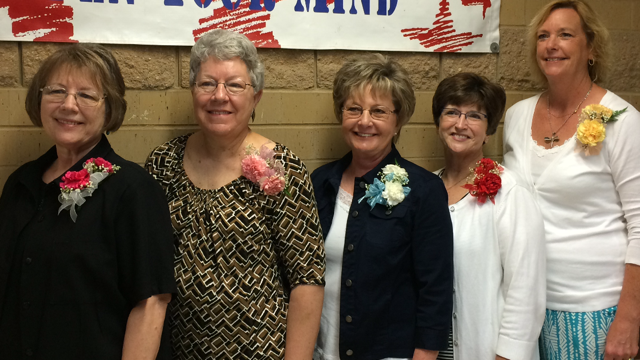 Many activities were planned for teachers and staff members during Teacher Appreciation Week by each building. On Wednesday, May 6th, the District invited all staff members to attend a breakfast at the high school commons during late start. The morning began with a downpour of rain, but that didn't damper the attendance.  The commons was filled with staff members.  The cafeteria staff was recognized for baking omelets, sausage, hash browns, and had available muffins, bagels and fresh fruit along with orange juice, water and coffee.  Board President Kirk Hayden made sure the coffee and water was on tap.

Superintendent Randal Chickadonz thanked those in attendance for all that they do for the students.  “Although at times it has been hard to continue your daily routines given the outcomes of the state budget situation. Our students haven’t suffered and I thank you for that,” said Randal.

Retiring staff members were introduced and asked to step to the front for recognition by Superintendent Randal Chickadonz then following their building administrator said a few words about their staff member.  Retirees are Cathy Hoss (1994-2015), Meggin DeMoss (1998-2015), Cindy Bradford (1995-2015), Carol Waltman (1994-2015) and Carol Warren (2001-2015). Together the District has received over 90 years of service from these ladies.  Each retiree received a corsage, card and a clock.  Each clock included a brass plate that had their name, years of service and this statement: In Appreciation of Dedicated Service to Rose Hill USD 394.

Everyone enjoyed a good time together, as well as the good food that was prepared before them and all had a chance to say their “good-byes” to those who will be leaving soon.

Thank you to all USD 394 staff members for making this school year successful and a great learning environment for our students.

Congratulations to the retirees! The District’s Staff will miss them dearly, and may they enjoy what the future has in store for them. They deserve it!!